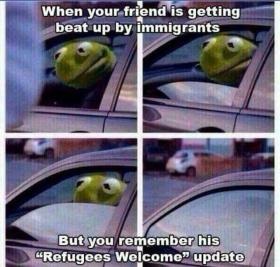 Bureaucrats at the State Department brought 500 refugees into the country on Tuesday, one day before President Trump “is expected to order a multi-month ban on allowing refugees into the United States except for religious minorities escaping persecution, until more aggressive vetting is in place,” according to Reuters.

The temporary ban on refugees will be one of several executive orders on immigration President Trump will sign on Wednesday, Reuters reports. “Another order will block visas being issued to anyone from Syria, Iraq, Iran, Libya, Somalia, Sudan and Yemen, said the aides and experts, who asked not to be identified.”

On the campaign trail, candidate Trump promised to suspend refugee resettlement from Syria, as well countries that are hostile to the United States.

We are about to hear that giant sucking sound

It will be all the liberals leaving the state Dept., the Park service and all of the other Federal jobs

Nothing to worry about here

Dieme was traveling with his father and several other children, who arrived to Chicago on a flight from Dubai. After clearing paperwork, the family was being escorted to their next flight, when a U.S. Customs and Border Protection officer noticed Dieme unresponsive.

Emergency Medical Services was immediately notified and arrived at the terminal. Standard procedures are in place to address sick passengers, according to a spokesman for the Centers of Disease Control and Prevention. Dieme was sick prior to the flight, but did not report any symptoms on the flight. He was examined at the airport by CDC officials, in an isolated room. Dieme’s temperature was taken, but he had no fever. He experienced diarrhea and vomiting. It was determined he should be taken to the hospital.”

What could possibly go wrong?

Watch the video, it is worth the time. I know, too little too late from SNL, but they really nail it with this one.

“In a Telemundo interview in September 2013, Mr. Obama said he was proud of having protected the “Dreamers” — people who came to the United States illegally as young children — from deportation. But he said at the time that he could not apply that same action to other groups of people; the very thing he is soon expected to announce.

“If we start broadening that, then essentially, I’ll be ignoring the law in a way that I think would be very difficult to defend legally,” Mr. Obama told Jose Diaz-Balart in the interview. “So that’s not an option.”

In an immigration speech in San Francisco last November, several protesters repeatedly interrupted the president, yelling “Stop deportations! Stop deportations!” Mr. Obama told the protesters that he respected their “passion,” but insisted that only Congress had the authority to do what they wanted.

“The easy way out is to try to yell and pretend like I can do something by violating our laws,” he said. “And what I’m proposing is the harder path.”

So, I guess he has decided that he IS the emperor. But what can he say, he is just doing it for the good of the country right?

“If this huge influx of mostly low-skill workers provides some benefits to the economy as a whole..it also threatens to depress further the wages of blue-collar Americans and put strains on an already overburdened safety net.”

President Obama, The Audacity of Hope, 2006

Anti amnesty groups calls on citizens to send their underwear to DC to protest illegal immigration.

“An anti-amnesty group is calling on its supporters to mail their “gently used” underwear to President Obama in protest over the flood of illegal immigration through the southern border. “

Gently used huh? Kind of like the NASCAR track at Daytona?