#Schumer : tasteless, powerless, nothing but a clown 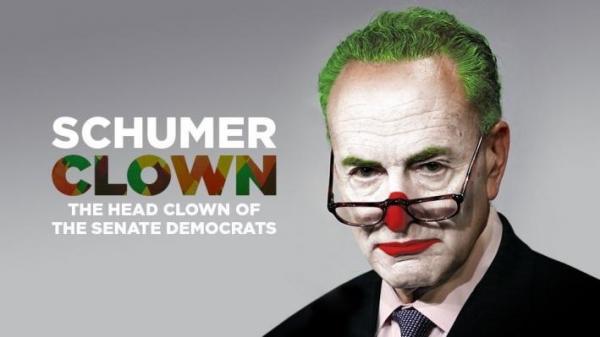 Oh yeah, and a prick

Schumer says Democrats “blew the opportunity the American people gave them” in the 2008 elections, a Democratic landslide, by focusing on healthcare reform instead of legislation to boost the middle class.

“After passing the stimulus, Democrats should have continued to propose middle class-oriented programs and built on the partial success of the stimulus,” he said in a speech at the National Press Club.

He said the plight of uninsured Americans caused by “unfair insurance company practices” needed to be addressed, but it wasn’t the change that people wanted when they elected Barack Obama as president.

“Americans were crying out for an end to the recession, for better wages and more jobs; not for changes in their healthcare,” he said.

He noted that 85 percent of all Americans got their healthcare from either the government, through Medicare or Medicaid, or through an employer.

“So when Democrats focused on healthcare, the average middle class person thought, ‘the Democrats are not paying enough attention to me,’ ” he said.

Schumer’s concession is a striking change of tone from what he said shortly after the passage of the healthcare law, when he predicted that ObamaCare would turn out to be a strong political issue for his party.

A slew of Senate Democrats, including Blanche Lincoln (Ark.), Mark Pryor (Ark.), Mark Begich (Alaska), Kay Hagan (N.C.) and Mark Udall (Colo.), who voted for the bill, however, ended up losing in 2010 or 2014. Republicans attacked them constantly for voting for ObamaCare, an attack that became more potent after the law’s error-prone rollout.

On Tuesday, Schumer said that behind the scenes, he told other Democratic Party leaders that they should have focused on jobs and the economy instead of ObamaCare.

“Americans were crying out for an end to the recession, for better wages and more jobs; not for changes in their healthcare,” he said.”

Ya’ think Chucky? You arrogant prick. Now that half the country is pissed at your party and about a 1/4 is ready to go to war, you talk back your earlier points.

It goes to show that you had awareness of the situation then, but were too arrogant to care about anything other than your socialist agenda.

You seem to forget your earlier position but we haven’t.

Does anyone smell some more shellacking coming for the almighty party of Govt. control? I think Herr Schumer does.

Don’t worry Chuck, we have a light pole with your name on it.