Ingredients for a perfect picnic

Edam Cheese (Dutch: Edammer, [ˈeːdɑmər]) is a semi-hard cheese that originated in the Netherlands, and is named after the town of Edam in the province of North Holland.[1] Edam is traditionally sold in rounded cylinders with a pale yellow interior and a coat, or rind, of red paraffin wax. Edam ages and travels well, and does not spoil; it only hardens. These qualities (among others) made it the world’s most popular cheese between the 14th and 18th centuries, both at sea and in remote colonies 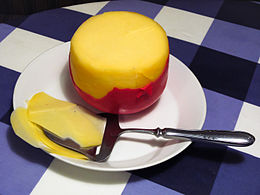 Fol-Epi means “wild wheat,” an apt moniker for this pasteurized cows’ milk, Emmental-style cheese produced in France’s Loire Valley. The dome-shaped wheel has a relief sculpture of wheat stalks around it, created from the specific form used to make the cheese, and the entire wheel is covered with an ample layer of toasted wheat flour. Soft and springy on the interior, with a scattering of dime-sized eyes, this cheese is aged for only three months. The flavor is mild, sweet, and gains a slight hazelnut flavor from the toasted wheat on the rind

Blue Brie is a triple-cream blue and white cheese with a surprising combination of creaminess and bitterness. It features a fresh, blue cheese aroma with hints of butter and mushroom, creating a uniquely delicious flavor experience. 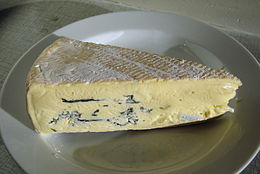 The name of this famous cheese comes from the valley of the Emme in the canton of Berne. It has been produced there from the 13th century. Nowadays Emmentaler AOP is made in around 200 village cheese dairies from unpasteurised milk from cows fed on grass and hay but not silage. It takes approximately twelve litres of milk to make one kilo of cheese. The use of any additives is prohibited, as is the use of genetically modified ingredients.

Genoa salami is an uncooked, cured sausage that was originally made in Italy with pork and veal, and seasoned with garlic, pepper, and red wine. Serve it thinly sliced on an antipasto platter or on sandwiches; cut it into small cubes when adding to salads, soups, frittatas, or other dishes.

Summer sausage is any sausage that can be kept without refrigeration. Summer sausage is usually a mixture of pork and other meat such as beef or venison. Summer sausage can be dried or smoked, and while curing ingredients vary significantly, curing salt is almost always used. Seasonings may include mustard seeds, black pepper, garlic salt, or sugar.[1][2]

Traditionally, summer sausage is a fermented sausage with a low pH to slow bacterial growth and give a longer shelf life, causing a tangy taste

This entry was posted in Uncategorized and tagged food, picnic, valentines day. Bookmark the permalink.